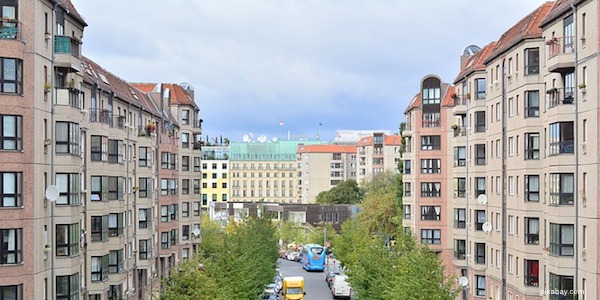 London was ranked amongst the first European cities for real estate investment prior to the Brexit vote, but in the aftermath, they plummeted to 27th place. London’s loss, however, was Berlin’s gain and investors flocked to the German city that offered stability and affordability.

Although the Brexit vote, ongoing negotiations, and the rumours of other EU countries preparing themselves to leave are clearly affecting the rest of Europe, the main issue is uncertainty. We simply don’t know what Europe or the EU will look like in terms of finance structures or government by 2025. We can make educated guesses but it’s nothing like how we felt five or ten years ago.

Most of that surrounds the UK, such as how investments made there will be affected by new trade deals and new laws, which explains a great deal of the slump in investment.

Berlin is a safe bet

By comparison, as of August 2017, Germany is now regarded as the place for low-risk real estate investment, with experts from all over the world now heralding the Berlin real estate market as a safe bet.

One Global Fund Manager, quoted in the PwC and Urban Land Institute’s Emerging Trends in Real Estate 2017 report, said: “We’re positive about Germany, which is going to be a safe haven in most scenarios, even if the Eurozone breaks up, which is not the central scenario.”

In that report, Berlin also ranked first in terms of Overall Prospects for the third year in a row, with three other German cities in the top five.

Because of this, many companies, like Google and Deutsche Bank, have chosen to move parts of their businesses to Berlin to tap into the highly-trained young workforce.

In a statement from November 2016, Google said: “In the last five years, the start-up scene in Berlin has grown rapidly, giving rise to many successful companies, such EyeEm and GoEuro, and thus becoming a leading European ecosystem. We are firmly convinced that the future will provide even more growth potential for entrepreneurs and we want to contribute our part.”

Berlin is in demand and affordable

Of course, this wasn’t entirely the result of the Brexit vote. That was merely the straw that broke the camel’s back. The reality is that the London market- thanks to several years of major price hikes- was slowing down and investors were already heading for the more affordable and much lower risk Berlin real estate market.

Currently demand for housing in Berlin (both to buy and to rent) far outweighs supply- despite the many new housing developments underway- as the population of the city grows, incomes increase, and existing property owners hold on to their investments.

This means that prices will probably go higher than they used to be, which is somewhat good news for those interested in buying, especially with interest rates remaining steady, Berlin real estate is still quite affordable compared with London.

As a result, many people from all over the world are turning to Berlin estate agents, like First Citiz Berlin, who cut through the red tape of mortgage applications in a foreign language and provide support through every step of the process including tenant selection if you are buying a property to rent out.

What does it all mean?

All of this put together means that Berlin is no longer vying for first place with London in terms of real estate investment. It’s already in the lead and going for gold. If the UK is still set on a hard Brexit, which means leaving the single market as well as the EU, they’ll have to significantly lower taxes in order to compete.

While it is far too early to know exactly how Brexit will affect the European real estate market; it may turn out that Berlin, and the people who invest in it, come out on top thanks to a vote they never took part in.

What are your thoughts on the growth of Berlin’s real estate market? Will you be investing? Have you already invested? Let us know in the comments below.

Is Capital Gains Tax On Property Good For New Zealand?