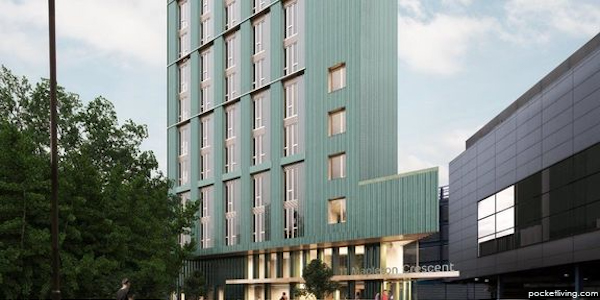 Have you heard of “micro-flats”? If you’re living in London, you’ll be used to seeing it mentioned in newspapers and online. Some are saying this new style of housing development may be the answer to the housing crisis.

The term “micro-flat” is also sometimes called a ‘micro-apartments or a mini flat. However, micro-flats are quite different to micro or mini flats, which offer everything, i.e. cooking, laundry, sleeping etc., within 24 square metres.

Micro-flats are just bedrooms with ensuites, and tenants use common rooms for sharing facilities like cooking, dining, laundry. Few individuals fully understand the concept or the benefits involved when purchasing a property of this nature, so with that in mind, this post will help to set the record straight once and for all.

There is a wealth of info below that anyone can read to understand the situation better. By the time readers leave this page, they should grasp the concept of a micro-flat a little better, which might encourage them to make better choices in the future. Micro-flats are here to stay, so it’s vital that everyone (especially younger readers) takes the time to educate themselves.

There is a property crisis in the UK because many young people can’t afford private rents, and they struggle to get on the housing ladder. Prefab or modular homes may be the real estate of the future for larger abodes, however it’s Micro-flats that are deemed the perfect solution by many experts in the industry.

The concept is simple. Residents share lounges, dining areas, and laundry rooms while living and sleeping in their private space. The tiny apartments in these co-living properties are much cheaper to rent and purchase than anything else on the market today. On average, tenants can expect to pay around £230 to £360 to live in that accommodation each week. However, the price is inclusive of all bills.

Micro-flats are cheap because they offer:

Who buys or rents micro-flats?

Young professionals are the most suitable tenants for micro-flats at the moment. Still, anyone on a low to medium income could benefit from the accommodation. First-time buyers are also attracted to the prospect, regardless of their ages.

According to some studies, the people currently taking advantage of micro-flats have a median income of around £32,000 per year. That means residents can keep a roof over their heads and survive in the capital even if they earn stockbroker wages.

However, it’s important to note that property investors make up most of the market. Those professionals purchase the flats and then rent them out to workers who reside in the local area.

The micro-flat market now makes up between 5% and 10% of Britain’s build-to-rent private rental sector. So, there are a LOT of properties out there for investors at the moment.

Many people choose to purchase because the rent per square foot can be 5% or 10% higher than traditional homes in the capital. That means anyone who buys and leases a micro-flat will see a healthy return on their investment. The only issue at the moment is that demand for micro-flats is lower than other properties. Still, that is something most investors think will change in the coming years. As more professionals struggle to find affordable accommodation in the capital, many will move towards co-living alternatives.

What’s on offer at the moment?

The mayor of London, Sadiq Khan, has taken a long hard look at the housing crisis during the last few years. He firmly believes that micro-flats are the solution most young people and first-time buyers desire. That is why he allocated £25,000,000 to assist developers in constructing no less than 1,059 affordable homes and flats by 2021.

Most of them will sell for at least 20% below current market rates. So, right now, there are many opportunities for investors and people on low incomes to improve their situations. Will the construction of more micro-flats continue during 2022 and beyond? Almost certainly! Countries like Japan have used strategies of this nature for a long time. With that in mind, it should come as no surprise the UK has jumped on the bandwagon.

Is there a lot of competition?

If we’re discussing London, there are few alternatives to micro-flats that provide as many advantages. However, some people co-live with other professionals for around the same price in less than affluent areas. Outside of the city, many young people attempt to keep their living costs down by building or investing in micro-houses and eco-homes.

Indeed, many YouTube videos and blog posts explain how it’s possible to create a home for less than £10,000 in the UK. Still, those ideas will never compete with micro-flats in London. So, from the perspective of low-paid workers and investors, there is little competition in the marketplace.

Are micro-flats here to stay?

As mentioned previously, Sadiq Khan has allocated substantial funds to assist developers in obtaining brownfield sites for sustainable micro-flats by 2021. So, people will have to wait a few years to take full advantage of the market. Still, plenty of investors are showing interest right now. First-time buyers are also spending their time researching the situation. That would suggest that micro-flats ARE here to stay and that the marketplace will only improve as time passes.

When all’s said and done, many of the country’s most successful businesses place their offices in the middle of the city. So, it’s essential the people they employ can afford to reside within a reasonable commute of those locations. If the UK doesn’t provide affordable housing in the capital, many of those talented individuals will take their talents elsewhere. That is why Sadiq Khan is so enthusiastic about providing funding.

We hope reading the information from this article has helped more city-dwellers understand the micro-flat concept and assess the situation. By 2021, developers expect to have finished construction on some of the biggest co-living projects in decades.

So, now is the best time to become familiar with the concept and put a plan in place. Whether people plan to rent or purchase the dwellings as an investment, it’s sensible to perform as much research as possible before making any final decisions.

As it stands, micro-flats seem like a promising advancement for individuals, investors, and the development firms managing the building work.

How to make a small yard seem larger than it is