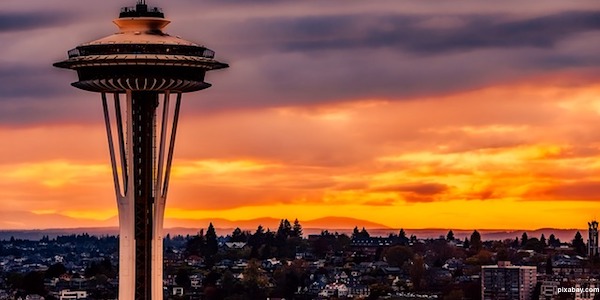 Young professionals should look for cities that have plenty of job opportunities for those starting out, a good median salary, an affordable cost of living and social amenities. And when you crunch the numbers, it turns out that hotspots like L.A. and New York City aren’t on the list. However, there are tons of great alternatives for young graduates entering the workforce. In this article, we’re going to run down our list of the six best American cities for young professionals.

Houston ranks high on affordability and job market. Full time pay for college graduates averages $43,500 a year. Rent costs around 23% of the average person’s income, one of the lowest figures for any major metro area in the U.S. Both of these factors explain why Houston’s population is much younger than average; 7.2% of the population is between 22 and 26, much higher than average.

Washington, D.C. has a very high median income for recent college graduates: $45,000. There are several colleges around the city, fueling a vibrant social scene. And Washington D.C. is one of the best places to find world-class art and entertainment venues that are either free to the public or quite affordable. The big city amenities are certainly a plus.

San Jose comes in first for career potential when you factor in GDP per capita and job growth. Its employment rate for those between 22 and 26 was third in the country. And its housing market is much cheaper than San Francisco. And San Jose offers far more opportunity than Sacramento; that city came in third on a list of the worst places to start a career.

Seattle has an above average number of young professionals, many of them attracted by major employers. This gives Seattle a very high median annual salary. It came in first on Forbes’ annual list of cities for young professionals. Seattle did far better than Portland; Portland was reportedly one of the worst places for young adults to start a career.

The Dallas, Texas metropolitan area has an 82% employment rate for those between 22 and 26. Dallas, like Houston, has a rather affordable housing market. According to Thrillist, Dallas was one of the fastest growing cities in terms of new millionaires. Dallas was ranked a “beta plus” world city because it is a leader in innovation and entrepreneurship.

The best cities for young professionals offer the ability to earn a good living without spending it all on housing while still providing plenty of fun things to do. And there are many excellent options across the country for you to consider.

What Is It About Scandinavian Furniture and Design?

Flooring Types That Add The Most Value To A Property