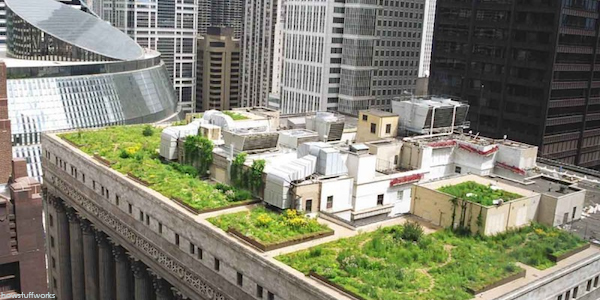 Heat islands, or the built-up areas in a city, have temperatures that are 1.8 degrees to 5.4 degrees warmer than surrounding rural areas. Temperatures can be as high as 22F higher in these areas.

Heat islands have led to the rise of the green roof, which has been able to reduce cooling costs, air pollution and even gas emissions.

Green roofs are a mitigating strategy to help offset heat islands, and there are several reasons we’re seeing cities incorporate them into their buildings:

Energy costs are also reduced in the winter.

Green roofs are able to last twice as long as their traditional roof counterparts. The main reason for the increase in longevity is that the roof protects against extreme heat. Because the roof absorbs the heat, it takes less damage and its lifespan is extended.

For buildings and cities, this can mean a dramatic reduction in future maintenance and replacement costs.

Stormwater is responsible for more than just flooding.

The ability to reduce stormwater runoff will also reduce pollution in cities.

4. Oxygen Production and the Removal of Air Particulates

Green roofs allow for higher oxygen levels, and the roof also acts as a filter. A green roof will be able to remove air particulates, reducing pollution in cities, too. When air conditioning demand is lowered, as we’ve seen with green roofs, this will also lead to lower levels of pollution.

But a green roof is able to lower these air pollution and greenhouse gas emissions. The vegetation removes the greenhouse gases and pollutants through what is called dry deposition.

Green roofs provide an aesthetic benefit, and it also acts as a habitat for animal and plant species. The quality of life is also improved for residents in areas where green roofs are installed. Pollutants and emissions are lower, the air is cleaner and the heat island effect is reduced.

Noise pollution is also lowered thanks to the green roof’s ability to absorb and reduce sounds. The roof will act as a sound insulation layer on buildings, and in bustling cities, this can lead to a rise in overall resident happiness, too.

Sustainability: Good for Profits, Good for the Planet

Greener Buildings Made Possible With Robots