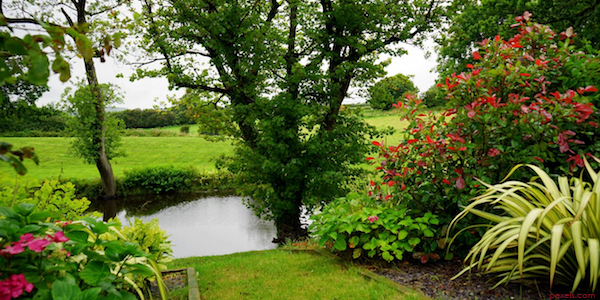 Estimates vary greatly as to the economic value of landscaping and other projects when it comes to selling your home. Some realtors even caution against too much landscaping, as it could scare away potential buyers who see such projects as expensive and time-consuming maintenance projects. Nevertheless, the rule of thumb is that curb appeal endeavors usually generate about a 150 percent return, although there is anecdotal evidence that the return may be much, much higher (as much as 1,000 percent).

Landscaping is important even if you do not plan on selling your home, because it makes a statement about your values.

To many people, nothing is more welcoming than a large array of colorful flowers in the front yard. A variety of annuals and perennials essentially gives your home a makeover three or four times a year. If your home is often the center of social events, flowers put everyone in a good mood. Snapdragon, Lily-of-the-Nile, Petunia, and Gertrude Jekyll roses all look very good in front yards.

Additionally, if your house is close to the street, erect a small fence, because it gives the illusion of more space. Even if you don’t add this step, it is probably a good idea to at least consult with a professional landscaper, to avoid a haphazard or piecemeal look.

For those who want to set a more romantic and intimate tone, rambling vines are often just the ticket. Clematis vines usually look very nice, especially when they are in bloom with pink, red, purple, blue, or white flowers.

As a rule, vines are hard to plant and easy to maintain, simply because it is difficult to tell what the vine will look like once it matures. Again, professional advice is probably a good idea.

Pebbled driveways are incredibly eye-catching, especially when the pebbles are of different colors or arrayed in varying geometric patterns. Next, add very subtle slopes around the driveway to support the addition of flowers and other plant life. Just a few alterations can transform the most boring driveway on the block to the nicest one.

No one wants a one-dimensional home, so landscaping should not be limited to ground level improvements. Be sure and add a variety of upright baskets as well, to draw attention to the whole house as opposed to just the front yard.

The best landscaping baskets are large ones that contain three types of plants: Spillers that spill over the side, fillers that take up lots of space, and an eye-catching thriller in the center.

This colorful greenery fulfills several purposes. White flowers against dark green shrubbery give your house a classic look, while colorful flowers against lighter green shrubbery create more of a fun and carefree look. Large shrubs can also conceal fences, greenhouses, garages, and other structures that some people consider unsightly, or they can block out traffic noise from a busy street.

The best residential landscaping projects begin when the homeowner partners with a landscape professional. That’s the best way to ensure that your visionary project does not end up as money and time down the drain.