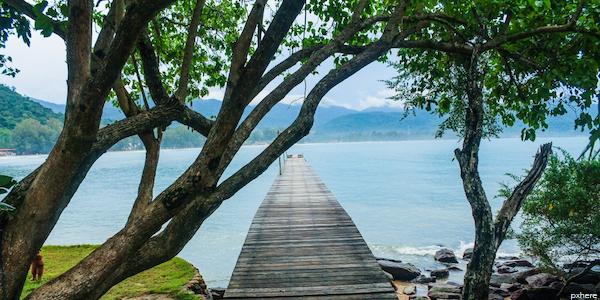 Everyone dreams of relocating to a luxury villa on the coast of a tropical paradise… but what if you actually made it happen?

Thailand has a thriving expat economy due to the amazing quality of life, beautiful landscapes and delicious food there. Expats in Thailand often run their businesses online by day and spend their afternoons and evenings exploring the bustling towns or relaxing on breath-taking beaches.

Sound like the life for you (why wouldn’t it)? We’ve decided to kickstart your search for a new life in the sun by tracking down Thailand’s best, cheapest, and most beautiful holiday home destinations for expats. Without further ado, here’s our top 4 list for you to investigate further.

Firstly – Krabi encompasses some of the most attractive destinations in all of Thailand, such as the Phi Phi Islands and towering limestone pillars jutting from the sea.

Secondly – there is thought to be around 2000 expats already living in the province, originally from countries including the UK, the US, France, Germany, Spain, Australia and more. They likely came for the low-cost, high-standard of lifestyle in Thailand, and chose to settle in Krabi because of the amazing surroundings and welcoming locals.

Besides this, the draw of Krabi for expats is the great education for children there, easy access to minor healthcare (for major operations, people generally go to Bangkok which is around an hour away by plane), and the international airport within the province which allows an easy route home to visit friends and family.

Join the estimated 4000 expats who have made Hua Hin their home! This seaside resort used to be a popular tourist destination, but with improvements in infrastructure and developed transport links over the years, people regard it more and more as a place they could permanently settle. It’s often described as ‘city meets ocean’ and is a brilliant option for people who want to enjoy the best of both worlds.

Hua Hin has experienced a property boom in the last few years, with masses of choice now on offer and hundreds of estate agents flooding into the area. If you are interested, it’s recommended that expats contact a local agent who speaks their language (like Hua Hin Property Partner) for information on how to find your dream home in Hua Hin.

This city in Northern Thailand retains plenty of traditional Thai culture, with temples galore and amazing mountain ranges to explore, while welcoming a large expat community. The foreigner population in Chiang Mai ranges from families, to businesspeople, to travellers, to single men and women of all ages. So, if you’re looking to pack up and move out to Chiang Mai, you’ll find a diverse range of people to settle in with.

The city is welcoming to children, has easy access to healthcare, and contains Western department stores as well as traditional Thai markets (which people are encouraged to try out – even with cheekily inflated prices for foreigners, they work out far cheaper than Western stores). While Chiang Mai life is not as cheap as some other places, it offers everything you might want from a holiday home destination in the sun.

Southern Thailand is where the beaches are at – so again, if you’re looking for an exotic getaway, Phuket should be high on your list. In the south more so than the north you can enjoy a better climate all year round and will never be short of gorgeous sunsets and new beaches to explore.

As Phuket is accustomed to tourists, being an expat there is not much different. It has all the amenities you would need – schools, hospitals, entertainment, restaurants, markets, transport hubs – as well as endless beachfront activities. As for housing costs, a furnished place in a local area (not an expensive area) can be as little as $500 per month. For affordable cost of living and a new lifestyle, Phuket is high on the list of recommended locations.

Getting a holiday home abroad, and in an exotic location is achievable just remember to do your research weighing up all factors including: lifestyle, cost of living, security, and political stability.

5 Ways to Use Social Media to Sell Real Estate

8 Tips to Make your Front Lawn Stand Out