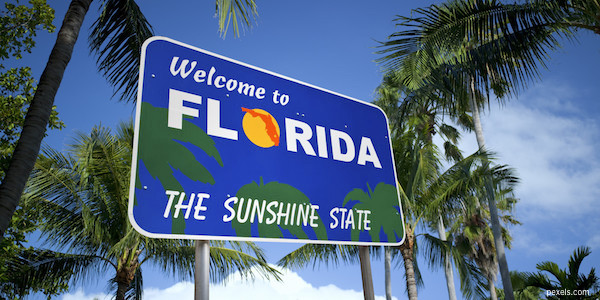 Florida is the third largest state by population, despite being the 22nd by geographical size. This is because so many people have made the decision to relocate to Florida over time.

Well, as one of the southern-most states, it enjoys great weather. But that’s just the start of the list. Here are 12 reasons you should consider buying a property and moving to Florida yourself.

Let’s kick off with a little about the climate of Florida.

It’s only just a little north of the Caribbean sea. It doesn’t take a genius to work out that weather tends to be on the warm side.

It also shares a latitude with very dry Northern African countries like Algeria. Lay back on a sunbed and soak up some rays.

But being on the coast, there’s enough cooling humidity to make it a comfortable temperature much of the year. And there’s always the AC when it gets a little too warm!

Just make sure you take good care of the garden in the height of summer.

The first animal people tend to think of (besides Mickey Mouse) when talking about Florida is the alligators.

However, Florida is also home to armadillos, white-tailed and Key deer, fox squirrels and so much more. And in the water, you’ll find dolphins, turtles, rays, and otters.

In fact, ecologists say Florida as a state falls into the category of ‘endemism’, which means it has many unique species living there. The state Wildlife Commission has a list of all the animals you should seek out in this great part of the country.

That famous mouse is back. We don’t suggest making it a regular trip if you live in the state, as it can be quite an exhausting, if exhilarating, day out.

But as a special treat, there’s a choice of four large parks owned by Disney, which all operate in the Orlando area. Those four are:

These are the largest, but there are actually many Disney-themed parks in the same area. These include water parks and resorts.

While Disney World is definitely the most famous of all Florida’s theme parks, the fantastic weather makes it the perfect place for this type of business to set up shop.

Be sure to take the time to visit Universal Studios, and its sister park Universal’s Island of Adventures.

There’s also Busch Gardens in the Tampa Bay area, SeaWorld, Legoland Florida – and too many other parks scattered around the state to name here.

The Florida Keys are one of the most beautiful places on the planet. Pristine waters, exotic mangrove swamps, and one of the warmest welcomes in the State await you.

Hit up a rum tour and enjoy the local restaurant scene. Hire a boat for the day and enjoy a fishing trip. And for a cultured day out, be sure to swing by Ernest Hemingway’s old house.

This is now a museum, where visitors can explore where the Pulitzer and Nobel Prize-winning writer worked. It’s now home to around 50 polydactyl cats – each has six toes on their feet. They normally have five at the front, four at the back.

These cute (but lazy) cats are all descendants of Hemingway’s own polydactyl cat, Snow White.

The Florida Keys have a gift for anyone living in the state, regardless of whether or not you take a visit.

Key lime pie, fresh as you like, made with the bittersweet juice of the beautiful limes named for the Keys.

It’s a simple recipe, but once you’ve had it this fresh, imitations will never taste the same.

Keen golfer? You’ll be pleased to hear that there are over 1,250 golf courses in Florida. That’s more than any other state.

It’s also been said to have the ‘most golfiness‘ of any state, by experts citing the “terrific facilities and superb weather nearly year-round.”

So you’ll never be short of a place to play a round or two.

There’s no state income tax in Florida, and a low sales tax too.

Overall it has the second-lowest state taxes per head.

While this might change in the future, right now this makes Florida an excellent place to live, work, and buy property.

Of course, you can’t escape federal taxes. But the low state taxes make a great difference to the amount of cash you have in your pocket after payday.

The low sales tax is one of the reasons behind the generally low cost of living in Florida.

Yes, this will vary depending on whether you’ve chosen to live in a Miami apartment, a West Palm beach home, or a St Pete’s suburb, but by and large, it’s a cheap place to live. And the wages are relatively good in most parts of the state too.

In the shops, and the restaurants, expect to find affordable food – and travel costs aren’t too bad either.

The seafood in Florida is unbelievable.

It’s of such high quality, fresh from somewhere along the 8,436 miles of coastline bordering the state. The best thing about Florida in this respect is that on one side is the cold Atlantic, the other, the warmer Gulf of Mexico.

This means that there’s an astonishing variety of seafood available year-round. If you’re looking to try something new, this list sets out most of the things you’ll want to try after you move to Florida.

Otherwise, just listen to the recommendations made by your server or the chef. They’ll be only too pleased to share their love of Florida seafood with you!

A haven for water sports, Florida is home to boaters, jet-skiers, windsurfers and loads of other water sports fanatics, taking to the shores of the Sunshine State to cool down.

It’s the perfect place to learn how to do any of these things. Buying a boat is often the first major purchase people make once they’ve settled into their new homes after they relocate to Florida.

The financial crisis caused boat numbers to briefly dwindle, but there are now nearly 1,000,000 boats in the state again.

Once you’ve got one of these, the next step is to grab yourself a pair of water skis, a wakeboard – or for the less ‘extreme’ boaters amongst us, a towable donut. Or just a fishing rod and gear for lazy days at sea.

Here’s a thought – perhaps you should even consider buying a home right on the waterfront, with its own jetty or dock?

You don’t have to visit the ISS to wonder at the universe beyond our planet.

Head to Cape Canaveral instead. This is home to the Kennedy Space Center, a NASA visitor center for the curious.

But better than this, it’s home to a major NASA launch site, on Cape Canaveral Air Force Station – right near the Kennedy Space Center

If there’s ever a rocket going up when you have time to make the trip, even better. Just book a room ahead of time – the town gets packed quickly! It’s a once-in-a-lifetime experience for many, and no one who sees this sight forgets it quickly.

Sports fans will find lots to enjoy in Florida, such as the Daytona 500 which is held annually at the Daytona International Speedway.

There’s also NBA and NFL teams who’ve made their home here, like the Miami Dolphins and Orlando Magic.

There are also great facilities throughout the state for fans who want to take part in the sport themselves at an amateur level.

Looking to Relocate to Florida?

Thinking about making the move to Florida? This company will help you to find a property that suits your needs. They’ll also walk you through everything you need to know about moving to the state.

We hope your move to Florida goes smoothly. Even if it gets a little stressful on the move day, just remember – you’ll be sipping on that ice cold Florida OJ before too long.

Looking for more advice on property before you relocate to Florida? We can help you.

It doesn’t matter whether you’re buying your first home or you’re moving for the hundredth time.

Check out the rest of our blog for great advice on financing, buying, and maintaining your home.

Related Topics:best things to do in Floridabuying a propertyFlorida realestatereasons to relocate to Florida
Up Next

How To Buy A House With Poor Credit

Settling into your first home